Read and know about some of the top tips and tricks for the multiplayer snake game Slither.io. Slither.io is a multilayer game and allows you to play it with your friends. This is basically a casual snake game that can be played on PC as well as on mobile phones.

You can play the role of a snake, similar to other players, and maneuver it across the screen to avoid being exploded or eaten up by the other snakes. Find out about some of the top tips and tricks to help you play the game Slither.io.

As the player impersonating a snake, you will have to maneuver your snake around the entire arena in search of a bunch of glowing orbs. You have to use the mouse to control its speed in game Slither.io. You can click the left mouse button to increase its speed. Keep in mind that there is a slight reduction in mass every time you increase its speed.

While you tempt other snakes to run into your body and burst, you should keep your head protected at all times. If you bang your head accidentally with others, it will take you down. 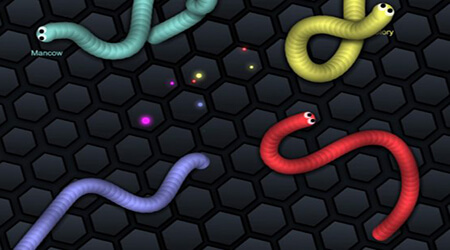 The objective of playing in the game Slither.io is to avoid being eaten by other snakes, as well as have them collide against your body to be destroyed and ready to be gobbled up by your snake. This is easily possible when you grow your size. Try to eat as many small snakes around the arena as possible, and do not keep your focus only on eating the glowing orbs. While it is important to eat orbs to deal better with attacks from your adversary snakes, killing the antagonists is important as well. The bigger you grow, the higher will be the chances of them colliding against your body and perishing.

While trying to find the orbs, look around your map. Your final aim is to climb atop the game Slither.io leaderboard, and becoming the undisputed leader of the snake pit. Move fast while gobbling up as many snakes as possible. This will keep the mass growing, and offset the reduction in size with a faster speed. When you are playing on mobile phones, double tap on the screen to accelerate the speed of your snake. On PC systems, holding down the left click section of your mouse will give a speed boost. The speed will return to normal as soon as you release your hold on the mouse.