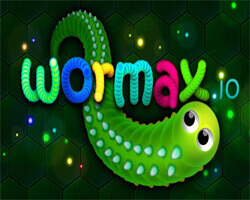 Wormax.io is a developed model of the slither.io game and is based on the usual io game style. Wormax.io’s rules are the same as slither.io that you need to eat food and kill other snakes. In addition, the game has some different skills which are stopping snake (W), immortal skills, which are the same as invisibility, (E), speeding up your snake with spacebar. In addition, there are some special skills dots in the map which you can find with a mini-map easily. These skills help you eliminating other snakes and gain more points than others. However, you do not use these skills illimitably because they have some time limits.

Moreover, it has a lot of different and cool skills compared to slither.io, so you can feel more enjoyable. It has a league system that is the same as the level system. The developers offer some priced skins and skills which you can buy from the market. Its graphics are better than slither.io because you can see certain differences. If you want to play a different style slither.io, we recommend wormax.io to you.