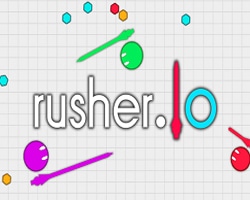 In rusher.io, engross yourself with this fast paced multiplayer game where you would like to eat hexagonic food in order to grow your spear in order to kill your opponent’s enemies.

What Is Rusher.io All About?

This is a fast paced action game that mainly deals with spears. This is a cool multiplayer game. The main point of the game is killing all other players with your spears by just touching them with it. Move around the whole screen by eating hexagonic colored food to grow your spear, and this gives you an added advantage in the game. Boost your speed to perform deadly attacks or to escape from your opponents. Try to reach the top of the scoreboard and act fast or you won’t last long. Enjoy Rusher.io! 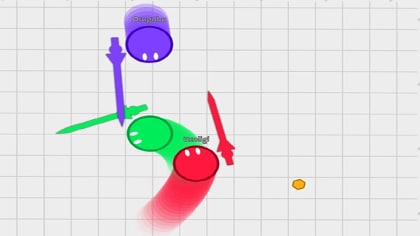 Rusher.io is a game where the long game means the better game, especially for the players. Rusher io is a combination of Balloons io and Agar io. On the one side, you keep growing while collecting color dots, on the other hand, you can attack opponents with the sword. The thing is your sword becomes bigger with every level up. The best part of this game is it is fast and extremely user friendly which is why across the globe, people who love io games, also madly in love with this genre of io game as well.

The main aim of the game is to stay alive and in action. Kill as many enemies as you can and eat colored dots in order to get rating points. Your size will increase with every single level point. A single touch is only needed to kill all your opponents in the first go. You can try and get away from the enemy by using the acceleration point. Do not let anyone attack you from the backside.